Having spent the best part of 40 years looking through a viewfinder of some sort, sitting in front of a computer editing photos or videos, producing websites and managing social media accounts, it’s a very strange feeling to now say when asked, “I’m retired".

Despite no longer taking on commercial paid work, it’s virtually impossible to suddenly stop what you’ve been doing for the best part of your working life so, for the past 24 months I’ve been taking on work on a ‘pro-bono’ basis for church, charity or voluntary organisations. I hope that my experience, skills and equipment can now be put to good use to those who perhaps, don’t have the budget or funding to produce what they want or need for their media requirements.

The following 'blog' items are a mixture, some from when I was working commercially and now, some new items that might be of interest.

I’ve used Sennheiser wireless mic’s for over 25 years, recently it let me down with an intermittent crackly mic cable which I failed to notice at the time, I do have a spare tie-clip microphone which solved the problem afterwards, but I realised I’d be stuck if it let me down or failed again so, off to Amazon to browse for a ‘standby’ system. 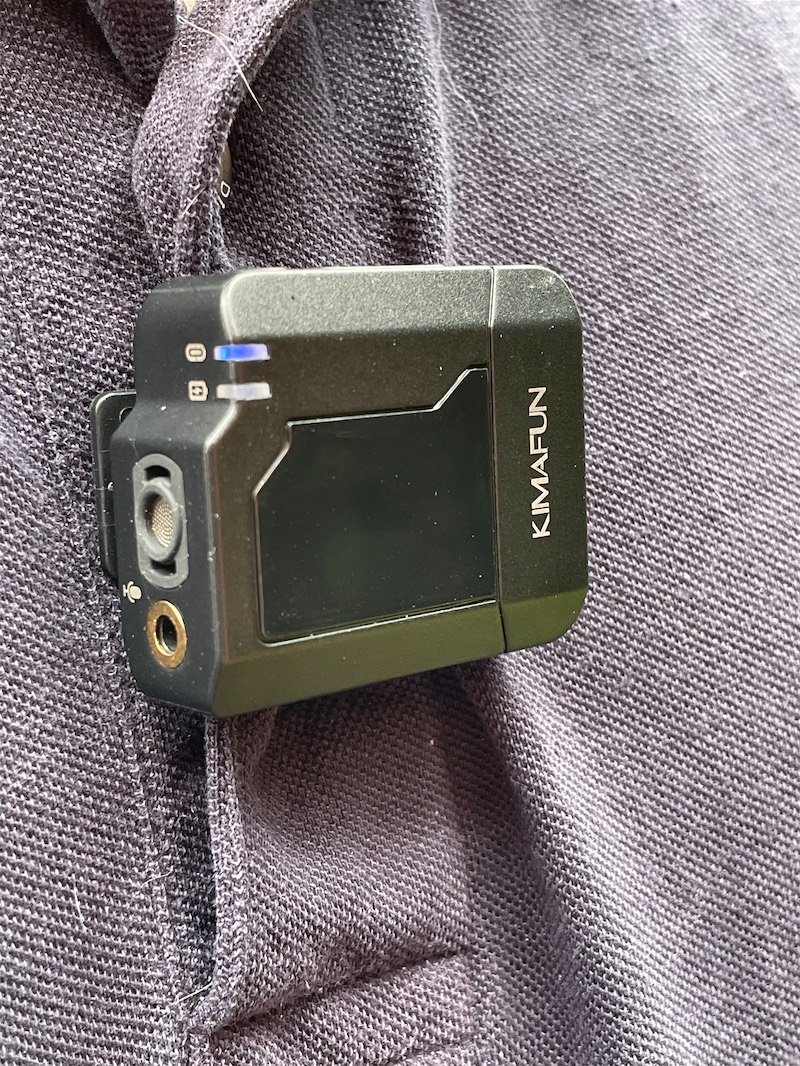 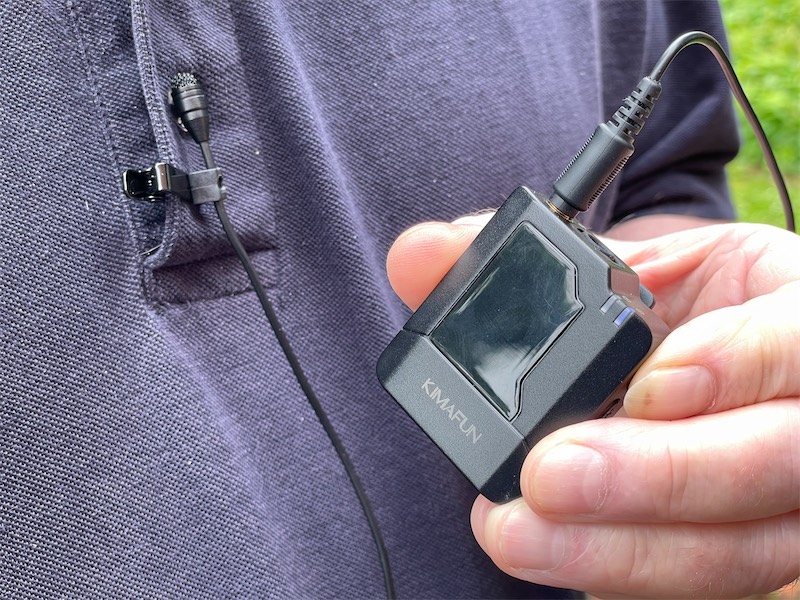 Now retired, I couldn’t afford a new Sennheiser system, I looked at the new RODE 2.4G system which Amazon had for £166, as they do Amazon also showed some ‘recommendations’ and one caught my eye, the KIMAFUN system for £82 with a promotion discount which bought the price down to £70, less than half the price of the RODE, I read the reviews and decided to order it, ironically I did need to order a RODE 3.5 to XLR plug at the same time to be able to use it on my camera.

I had tried a 2.4G system before when they first came out some 5 or 6 years ago and found it unusable due to a latency delay and I ended up binning it, so I looked forward to seeing how good these were.

It arrived next day and comes in its own case with all the leads you’ll need, a plugin microphone and a furry wind-cover. This system is tiny and lightweight, turning both transmitter and receiver on together allowed them to ‘pair’, there are internal rechargeable batteries with a stated 5 hour run time and they showed fully charged. In the event of battery failure ‘on location’ it should be possible to run them from a 5v USB ‘power-pack’.

Plugging in to my JVC HM170 and using headphones, I set the record levels, first I tried the built in mic and then the supplied plug in microphone, I loaded the clips into DaVinci Resolve, there was a slight background noise and it definitely wasn’t Sennheiser quality, however I didn’t see any latency issues. 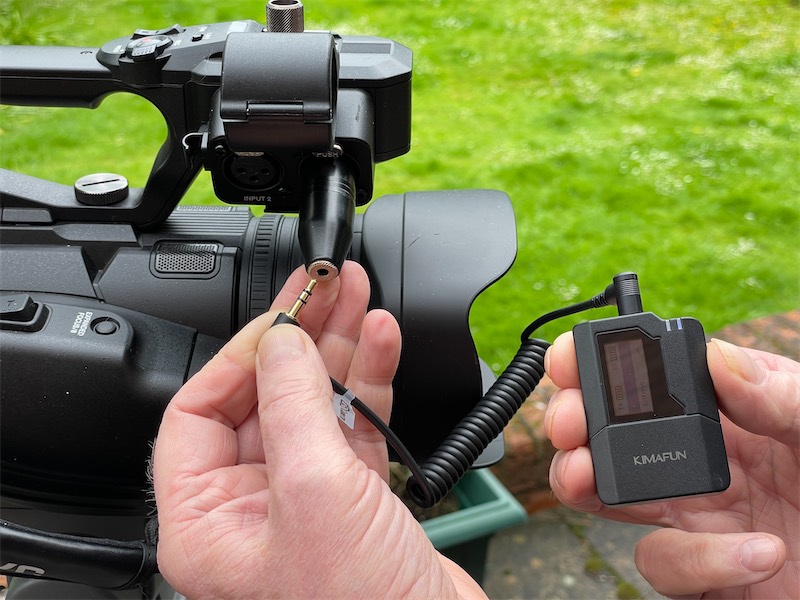 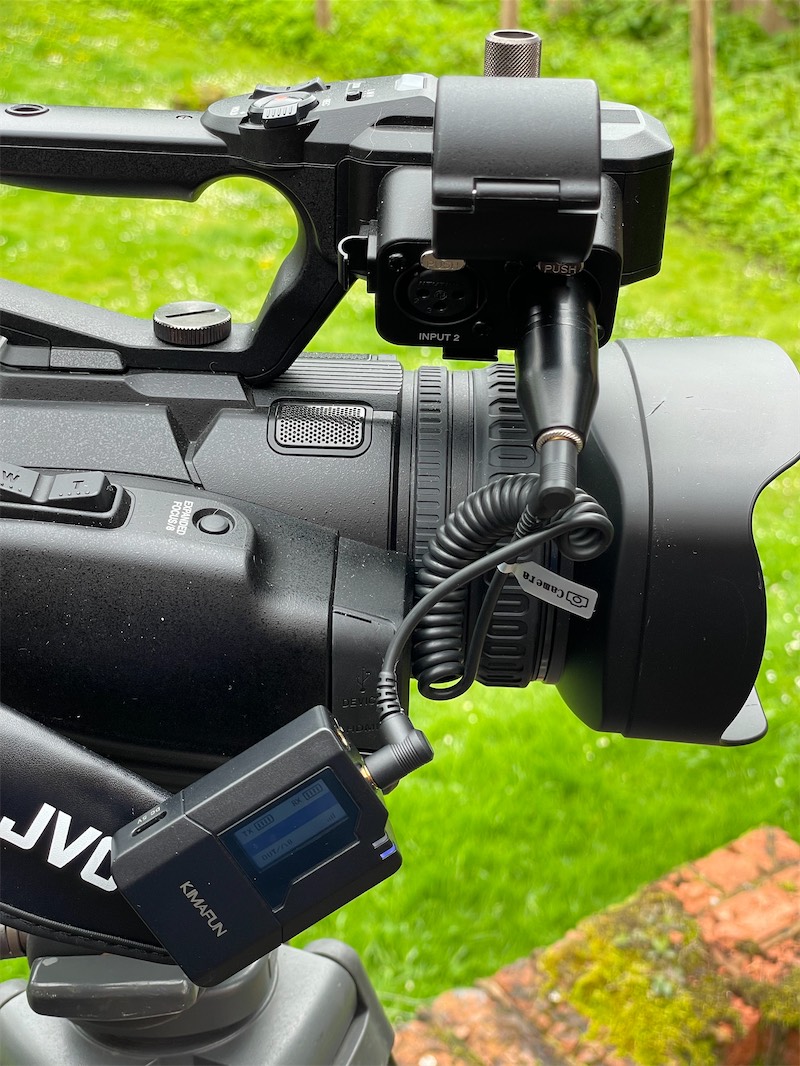 Next I tried a distance test, I walked to the end of the garden, listening back I did hear a minor sound dropout as I went out of line of sight for a second, but overall the sound quality was good however I’d dispute the stated distance of 160ft. I did appreciate the addition of a headphone output on the receiver which could also be used to take a backup audio copy to an audio recorder like a Zoom H1.

After some camera audio menu setting adjustments and adjustments to the transmitter and receiver audio levels I did get a reasonably clean sound with virtually no noise. Where I did notice very minor noise I was able to clean it up in Resolve with a noise reduction filter and a little EQ, overall I managed a very useable audio soundtrack.

For most applications, this system would be perfectly adequate, you might need to do some tests to get the best sound from them or, be prepared to do a little bit of a ‘clean up’ in your editing software if you’re super critical, but for the price I’ll certainly be making use of them.
Back
< Previous Post   Next Post >